Dryer Vent Cleaning – A Must! 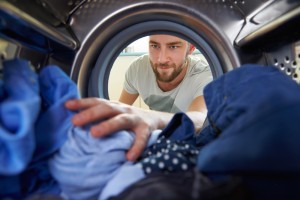 Here I am a professional in the trade of cleaning dryer vents.  And to my embarrassment, I recently had a situation come up.  My wife complained of smelling smoke when she dried some clothes.  I poopooed her.  First, that is never a good idea.  But here is where my “knowledge” got in the way of actually looking at her complaint.  I “knew” my dryer vent exited my dryer thru a 18″ flex hose and went directly outside thru a 5″ wall, so it could not be a problem.  In my mind, there was no way the vent could be plugged and capable of causing a fire.  When I finally got around to looking at it, I found that the maid had pushed the dryer vent back, too far against the wall, and crimped the flexible vent nearly closed.  This did not allow full exhaust flow, lint built up, and the heat sensor did not shut off the dryer.  Low and behold, the trapped lint actually started to smoulder.  It was quite by luck, that I did not have a full on fire.  The inside of the dryer actually turned black!!

So, I learned two very important lessons.  One, never poopoo the wife, and secondly, even very short dryer vent lines can cause a problem.  I found out first hand that dryer vent fires are a real threat.

One of the most common indications that the dryer vent is starting to plug is the length of time it takes for clothes to dry.  Most dryers have a sensor in them that will shut off the heat as a safety precaution.  When the dryer vent gets plugged the heat or pressue (depending on type of dryer sensor) will build up and automatically shut off the drying function.   The dryer will continue to tumble and turn but lacking heat, the clothes will take forever to dry.  So, increased drying time, is often a signal.  I, regularly, get calls that people will have just bought a new dryer, and the new dryer doesn’t work.  the problem was not the old dryer, but a plugged vent line.

Just last week, we got a call from a customer.  Their dryer vent was supposedly plugged.  Well, it was! The dryer vent was under the slab of the house.  It exited the dryer, went down traveled about 30′ under the slab and then made a turn up and came out the wall by the garage.  The dryer vent had about 35 gallons of water in it!!!  We were able to suck all the water out, and then roto rooter the wet lint out.  It was about a 3 hour project!!!  One might ask where the water comes from?  In the dryer one puts wet clothes.  The heat will evaporate the water and turn it to steam.  If there is a pressure drop in the vent line, because of plugging or too many bends, the pressure drop in the line will allow the steam to condense back into water, thus filling the vent with water.

Another problem we run into somewhat commonly is “cooked rats”!!!  This is one of the foulest jobs to handle.  The rats will get into the vent, and then get cooked by the heat of the dryer.

Where dryers vent thru the roof, it is not uncommon to find bird nests built in the dryer vent or again the RAT!

It is not uncommon to take 3 or 4 large trash bags full of dry lint out of a partially plugged vent.

The longer the vent and the more bends that are in it create the greatest accumulation of lint.  There are some customers we have to clean every 6 months, and others every few years.

Dryer venting is often a not well engineered system.  Dryers can sit against an out side wall and directly vent thru the wall.  these product the least problems, except like I had where the short hose got crimped.  We find dryers that vent up through the ceiling, and roof.  Some vents go up and exit the house about 8′ off the ground.  And some will go under the house, under a slab or in the crawl space where one has a raised floor.  More often than one would think, we find that the dyer simply vents into the attic, or into the wall.  the contractors who built those houses, simply did not vent them, for whatever reason.